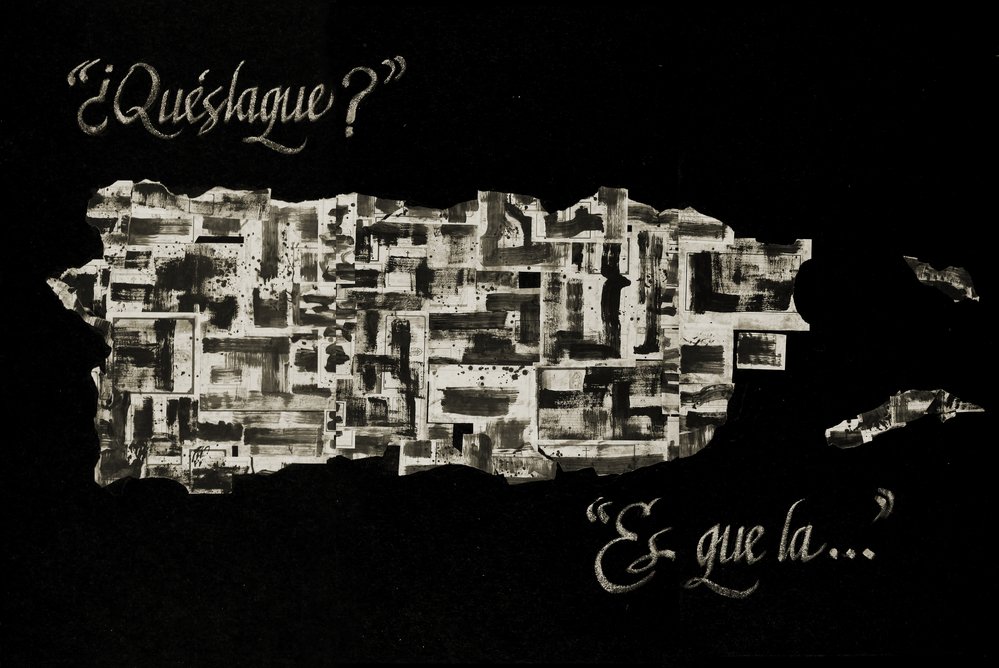 Acrylic, collage, and calligraphy on felt

On September 20, 2017, Hurricane María made landfall in Puerto Rico, devastating the island and upsetting the lives of its 3.4 million residents who were without power in some areas for months. The deadly storm caused over $80 billion in damages, collapsed the island’s power grid, and destroyed infrastructure. In the days and weeks following the natural disaster, the death toll reported by the government became the center of a controversy. While the government of Puerto Rico insisted that the official death toll was 64, studies conducted by Harvard and George Washington Universities revealed the death toll was at least 2,975.  It was not until August 2018, nearly a year after the hurricane, that the local government raised the official death toll to the estimated 2,975, which was 46 times higher than its original count.

One of Puerto Rico’s most prolific contemporary artists, Antonio Martorell was compelled to create ¿Quéslaque? Es que la… as a response to the Puerto Rican government’s unwillingness to acknowledge the true number of fatalities in the official narrative. In this work, the artist presents the outline of the island’s map composed of darkened, crossed-out obituaries, representing the massive loss of life as a result of the storm. This somber imagery coupled with the stark black background underscores the sense of death and mourning. The words ¿Quéslaque? Es que la… float in the dark space above and below the landmass and provide additional meaning to the image. To the question ¿Quéslaque? a slang phrase that asks whassup?, the response is Es que la… a reference to the word esquela, or obituary. This phrase also represents the beginning of an excuse or a failed explanation: es que la... means “what it is, is that...” This phrase was commonly heard from government authorities who, when confronted, provided insufficient answers to questions concerning the death toll.

A third level of meaning alludes to Puerto Rico’s political status and its relationship to the U.S.: es que ELA points to the official name of the Commonwealth of Puerto Rico: Estado Libre Asociado de Puerto Rico (ELA). This translates to Free Associated State, or Commonwealth, and for the artist, it signifies the territory’s colonial status. Following the hurricane, many denounced the insufficient aid given to Puerto Rico by the United States. This left many in Puerto Rico with their basic needs unmet. As a result, hundreds of thousands of Puerto Ricans left the island altogether to seek better living conditions elsewhere. For Martorell, a vocal advocate for the victims and their families, “it is sacred order to bury the dead, name them, and count them so they are not forgotten.”