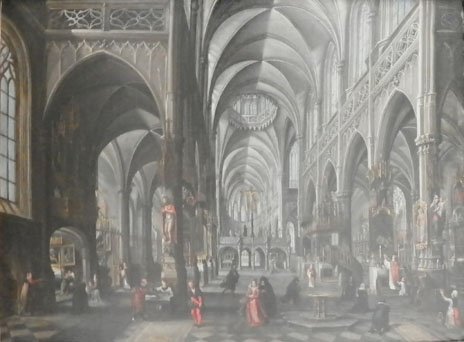 The artist Hendrik van Steenwijck II was active beginning in the late 1500s, when he was employed as a studio assistant in his father’s Frankfurt workshop.

Van Steenwijck II primarily painted exaggerated and embellished architectural interiors, and his body of work includes imaginative visions of the interiors of cathedrals, church crypts, and Renaissance palaces. The artist was very well-traveled, visiting and working in locations such as Antwerp, Leiden, The Hague, London, and Frankfurt over the course of his career. It is likely that the artist’s characteristic paintings represent conglomerations of various buildings encountered during his travels. However, he also liberally included architectural details that did not exist in any of the buildings he looked to for inspiration, fusing the concrete with the imaginary. Keeping with Netherlandish tradition, van Steenwijck II also painted still lifes and Biblical episodes, although these compositions are far less prevalent than his enormously popular interiors.

Paintings such as van Steenwijck II’s Interior of a Cathedral, ca. 1630, influenced many later artists as well as his artistic contemporaries. Van Steenwijck II greatly inspired the Flemish painter Pieter Neefs the Elder, whose compositions capitalized on the burgeoning popularity of the interiors genre. Neefs’ paintings included views of church interiors illuminated by two torches, expanding on the exploration of light and shadow established by van Steenwijck II and his father.