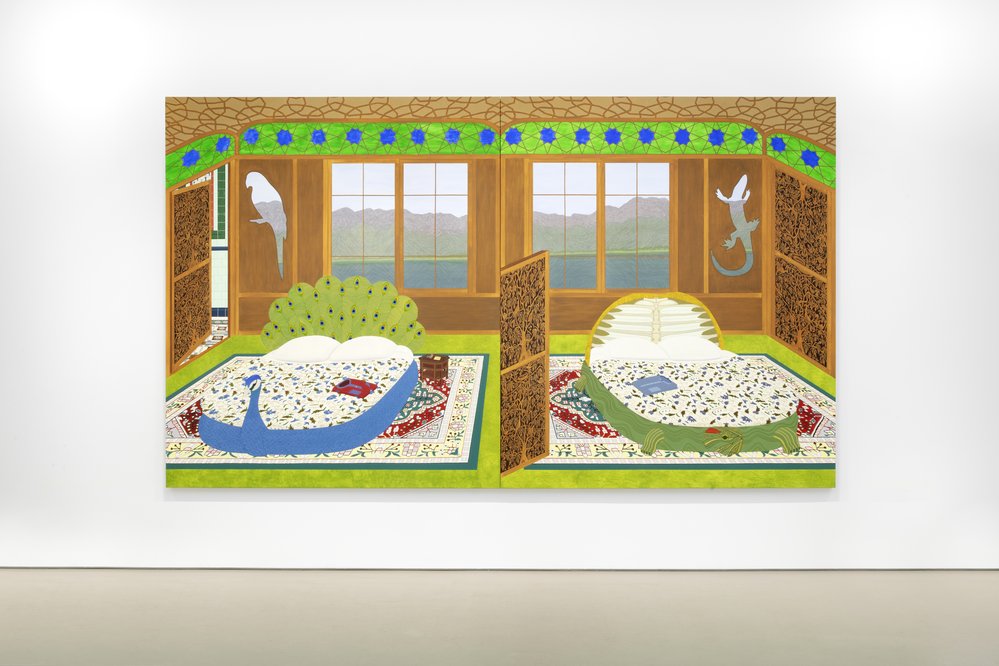 Houseboat on Dull Lake in the Valley of K, 2019

The Alfond Collection of Contemporary Art at Rollins College, Gift of Barbara '68 and Theodore '68 Alfond.

Behind the colorful and elaborate narrative worlds created by Suss lie messages of feminine empowerment and inherited tradition. The relationship between Western culture and ideas of domesticity often falls on opposite sides of the spectrum; on one end is the idyllic notion of hearth and home while on the other is a disregard for the work and identity building that occurs in such a “feminized” space. In the artist’s own words, there is a “complete dependence on and dismissal of domesticity”.

Instead, Suss pivots on these restricted misconceptions and considers the domestic sphere as a form of gendered heritage passed down through generations of women, not unlike other overlooked artistic cultures, such as quilt making. Aesthetics defined by their femininity and categorized as banal and everyday are expanded within Suss’ canvases, juxtaposing the scenes’ domestic comforts with more aggressive narrative elements from the stories that inspired them.

Her technique of using simple flattened shapes in her paintings also conveys the humility of everyday care labor that occurs in these spaces. By connecting her mixed genre work of domestic interior and storybook narratives, she questions the privileged designation of artistic genius, asking the viewer to reconsider the artistic capital of illustration within the context of fine art and the place of children’s literature within the literary field.