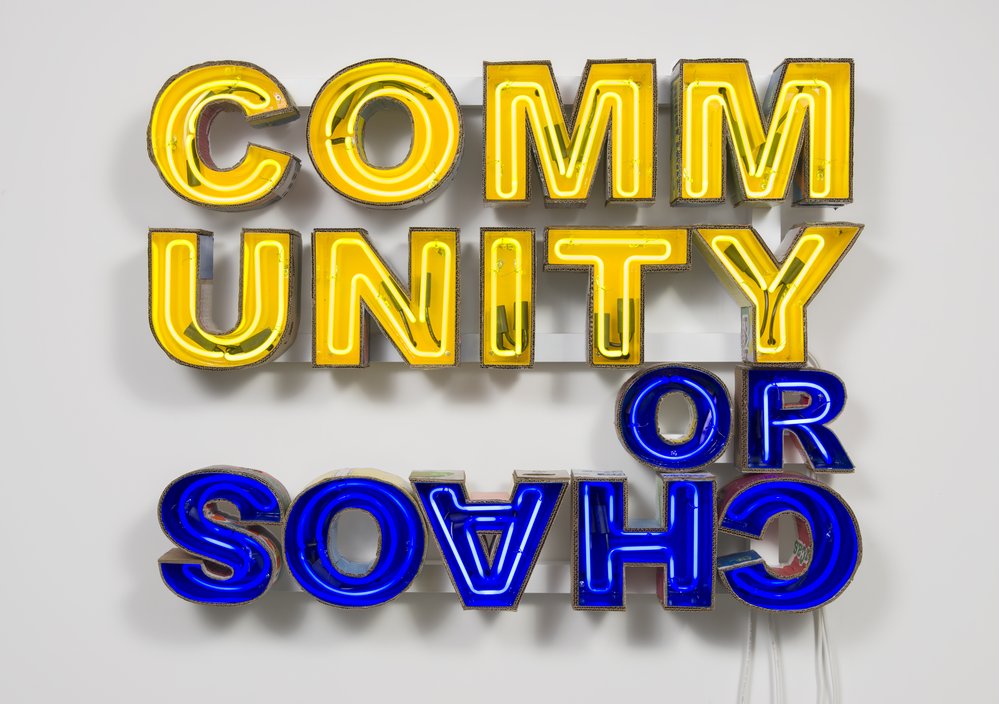 The Alfond Collection of Contemporary Art at Rollins College, Gift of Barbara '68 and Theodore '68 Alfond. 2017.6.28

In his final book, Chaos or Community, the title of which inspired Bower’s work, Dr. Martin Luther King, Jr. opens with the following passage:

"The bill that lay on the polished mahogany desk was born in violence in Selma, Alabama, where a stubborn sheriff handling [Blacks] in the Southern tradition had stumbled against the future. During a nonviolent demonstration for voting rights, the sheriff had directed his men in teargassing and beating the marchers to the ground. The nation had seen and heard, and exploded in indignation...

One year later, some of the people who had been brutalized in Selma and who were present at the Capitol ceremonies were leading marchers in the suburbs of Chicago amid a rain of rocks and bottles, among burning automobiles, to the thunder of jeering thousands, many of them waving Nazi flags....A year later, the white backlash had become an emotional electoral issue in California, Maryland and elsewhere. In several Southern states men long regarded as political clowns had become governors or only narrowly missed election, their magic achieved with a "witches'" brew of bigotry, prejudice, half-truths and whole lies.

During the year, white and [Black] civil rights workers had been murdered in several Southern communities. The swift and easy acquittals that followed for the accused had shocked much of the nation but sent a wave of unabashed triumph through Southern segregationist circles. Many of us wept at the funeral services for the dead and for democracy. During the year, ...young [Blacks] had exploded in violence. In an irrational burst of rage they had sought to say something, but the flames had blackened both themselves and their oppressors....Why was widespread sympathy with the [Black] revolution abruptly submerged in indifference in some quarters or banished by outright hostility in others? Why was there ideological disarray? A simple explanation holds that [Blacks] rioted in Watts, the voice of Black Power was heard through the land and the white backlash was born; the public became infuriated, and sympathy evaporated. This pat explanation founders, however, on the hard fact that the change in mood had preceded Watts and the Black Power slogan. Moreover, the white backlash had always existed underneath and sometimes on the surface of American life."

After hearing these words, written in 1968, how removed do the events of the past feel from the present day? How far has the fight for tolerance and equality actually come?